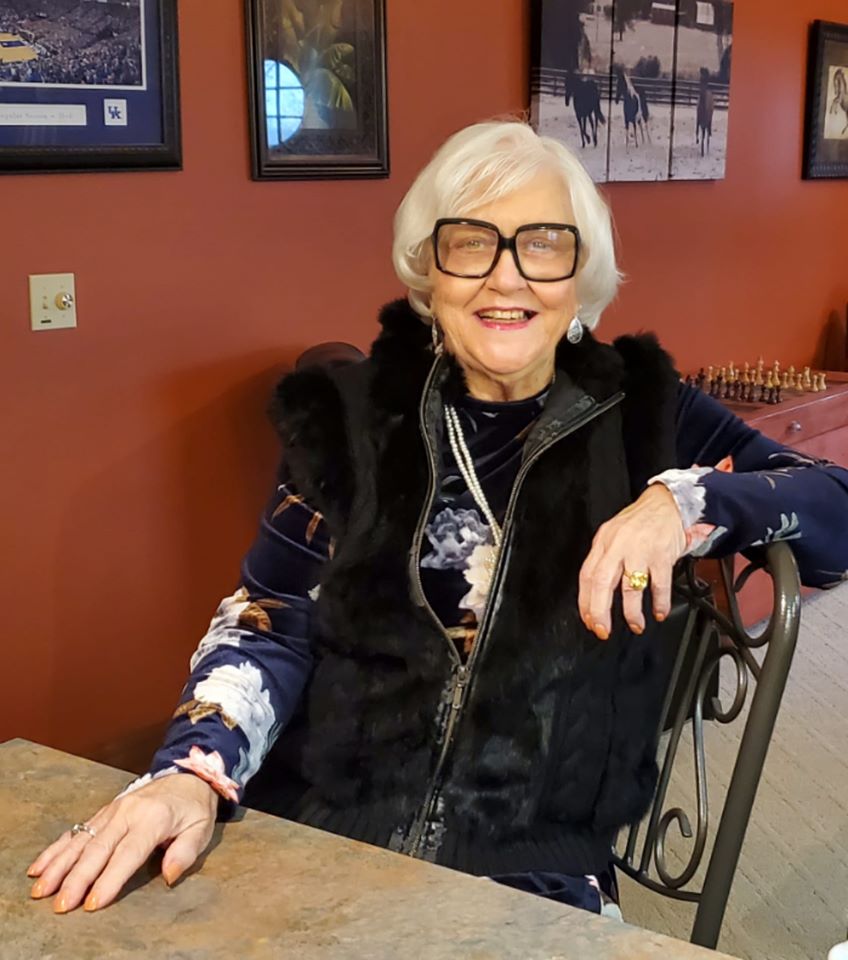 A few months ago, Jason and I asked his mother Peggy to move in with us. It wasn’t that she was invalid or needed to have constant care, but we just felt it would be easier to go ahead and make that transition now, rather than later.

I already had my time living with, and caring for my own mom before I married Jason. My three sisters and I, all pitched in to help her adjust after my stepdad passed away. I was the only one who was single, so I drew the ‘short straw’ – but oh how it turned into a blessing! At that time, I was writing for Chattanoogan.com, Chattanooga’s leading online publication. I had several weekly assignments, one of which was my column, a lot like this blog style I write for VUE.

In it, I had plenty of Mama Sagas, telling about the funny things she would do or say that delighted me so. But one of my assignments was writing food reviews which turned into more of an entertainment series than an actual review of restaurants.

My publisher had me write as someone else – a fictitious person, and I called myself Willie Mae. I was an 80-year-old lady full of sass! I never wrote what wasn’t true except in telling of my character as an old lady, but somehow they always came out funny and became a hit for readers to follow. When I moved in with Mama, I took her with me on these assignments. She became Willie Mae’s dear friend, “Lois”. The fun we had!

Mama passed away almost three years ago, and I have missed our fun times.

[Enter a beautiful white haired lady with that same joy]… Peggy and Mama were friends when Jason and I were babies. They were like sisters, having both been brought up in the country and learning to live the social life of Murray with their husbands.

Mama and Peggy played bridge which is something Peggy has continued all her adult life. Peggy is a competitive soul, and has enjoyed anything that challenges her mind. She also thrives on the social outings with her friends. It’s no wonder that with approximately 65 years of bridge playing under her belt, she comes through our door frequently singing, “I wo-o-onnn!”

Even though they had similar backgrounds, Mama and Peggy were very different in their interests. Peggy enjoyed athletics, and was an avid tennis player, and Mama enjoyed the arts and singing. So whenever Hubby turns a game on and Peggy is in the den with us, she will tell the players (and coaches) in the television what they did wrong. 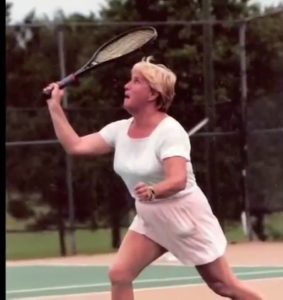 I am more like Mama and I enjoy the arts, but I love watching my Kentucky Wildcats play basketball. We moved to Lexington when I was a toddler and my Dad taught at UK. I grew up mostly in Lexington, so my love for the Cats is more than just basketball. And with my heart so deeply attached, the first time this lady I live with watched the Cats with me, I nearly lost my fervor.

As the new team full of freshmen was starting out this year and had lost the game we watched together, Peggy blurted out, “The Cats aren’t good!” I love this lady MORE than I love the Cats, so I took it in stride; but my heart sank hearing those words against my team. I don’t care when they stink, I still have hope and understand the dynamics that it will take time to build this team.

One morning, as we conversed, she mentioned how competitive she is and how sometimes she thinks she is too critical, so that was a segway, for me to tell her teasingly, that she can’t say the ‘Cats aren’t good’ anymore – she can say they aren’t playing well, but not that they aren’t good. We laughed. Even if I don’t know all the rules, or what fouls that are called, Peggy and Jason do, but, I see the heart of the Cats, I love the coach, and I love everything UK. And that has been our only CAT-astrophy.

Peggy is a delight, and because I know her heart, it really doesn’t bother me when she gives her opinion. In fact, I rather like it, because it brings back fond memories of Willie Mae and her sass. Peggy has sass and then some. Now don’t get me wrong, she is not sarcastic or hurtful when she says things; Peggy is a lady and she has sass with class.

When she gives her opinion without a filter – it is precious and cute. And it fills my heart to be able to have Mama Sagas again – only now I have Peggy Sagas to write. And this thrills me. And, like my own Mama, I think Peggy doesn’t mind the attention. My Mama would tell my sisters that she had to be careful with what she says, or she will end up in one of my stories! But I knew, she loved it.

Mama would even give me material! It was a way for her to be the star she always wanted to be, yet without being embarrassed for people to think she was vain, because I was the one telling the story and I was the one delighting in her.

Peggy is also an actress. She will perform frequently with the “Old Duffers and Powder Puffers” at The Playhouse in Murray. She loves to put on. There is nothing about this lady that I don’t delight in. At 83, she lives an interesting, outgoing life and she is fun. 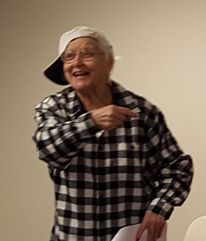 We have had a few close calls with Peggy’s health over the last few years, but she is too strong to let any of it keep her down. She still insists on getting out to play bridge with her groups at least four times a week, and she drives herself except the group at night so she calls transit to take her and a group member brings her back home. She is the easiest ‘burden’ to bear (if anyone ever uses that word to describe their aging parent – which I hope none of you do).

That is a negative word to our parents, and one in which they never want to be. But yes, sometimes caring for our parents can be burdensome, if it interferes with our work, or our responsibilities, and it can be stressful even though we love them and will do all we can for them. I dealt with that with my Mama, when I worked full time and was juggling many balls in the air. I learned so much while caring for Mama. I learned GRACE. I learned PATIENCE. And I learned to find the JOY in it all.

With Peggy, who is still independent, it is a lot different. Peggy still has a sharp mind, and she has a go-getter attitude about life. When she broke her hip a few years ago, she came to stay a month with us while she healed and then she was back to her normal routine. It was during that time, that she and I grew close, because this independent woman who gave me and her son our newlywed space in our first few years together; now had to depend on my help. I think it showed her my love for her.

It’s easy for a new mother in-law and daughter in-law to feel sometimes as if they are just being pleasant with each other, but when you face hard times together, that is when you reveal your hearts. She saw that my love was genuine and learned to trust me to take care of her. That is hard for someone so independent, but because of what I learned with my own mom, I was able to remember to help her keep her dignity, to encourage her when healing took it’s sweet time, and to show her how much I loved caring for her.

After she healed from that, she was back to her normal routine and living on her own. When she fell the next year and cracked her pelvis, we helped her through that too, but that’s when we started talking about moving her in. She wasn’t quite ready.

After a time at Lourdes, when she had suffered a mini-stroke last year, that brought on more concern for Jason and I, and it would be less stressful to have her move in, just so we will be closely involved in her health. 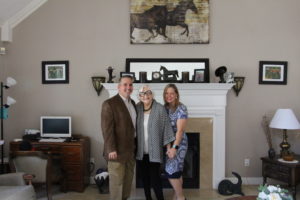 As usual, Peggy has bounced back with each little bump in the road, and she doesn’t really ‘need’ us, but she has said she feels safe knowing we are there. And like my husband’s slogan at his insurance agency, we now all have ‘peace of mind’. But it’s more than that. Sure, we like having her here so that we aren’t worried about anything happening, but also we enjoy her and we find that it is better than waiting until ‘she has to’ have us care for her.

Now, we get to experience all the joy she brings each day and we get to catch her little quips and anecdotes. And… it gives me more material for my stories. We are three peas in a pod. One of my Peggy Sagas I posted on Facebook was about the night I took her to the theater to see Little Women. It was raining that night, and we searched for a close parking space. There wasn’t one, so I told her I would let her out at the door and she said, “Well honey, there can only be one queen!”

The War of Summer’s End

The position of an EDH (Executive Director of the Household) is very different than ...

Most of the women I know have a love/hate relationship with their hair. I ...

It has now been two months since I broke up with my hair. I ...

With all the good reasons I had, for breaking up with my hair, when ...

As the summer green leaves turned into the rusts, golds, and burgundy of autumn; ...