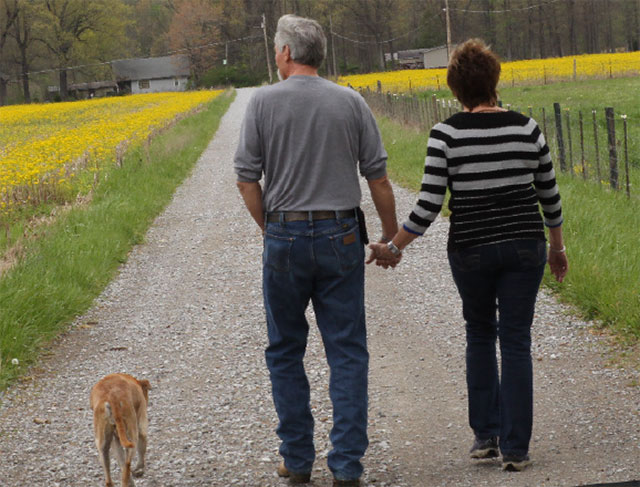 Everyone has a story. In the church realm, you may hear this titled as “testimony,” illustrating the experience someone’s had before, during, and after being renewed by God the Holy Spirit. The four basic elements to our stories are: the characters, the setting, the conflict, and the resolution. We all have unique beginnings and varied conclusions, yet it’s the moments in between that shape this road of life we walk. For the next few months I want to take you down some different roads and show you some intriguing scenery by way of stories from everyday heroes. I pray you are encouraged and motivated through the lives of these men and women to not be overcome but instead to overcome.

Louis and Pam grew up not far from one another locally, both being rooted in different traditions of Christianity. For Pam, faith was “just part of my way of life” as she had became a follower of Jesus at the age of 13. Louis “grew up in church” as well but had a slightly different experience. After attending Holiday services and weekly mass, he had a fear of God but did not know Him personally. Louis said, “I got to the point where nothing really mattered because I knew I was going to go to hell anyway. There was no way I could live up to the 10 commandments, so what was the point?”

After Louis and Pam were married, friends invited them to a New-Year’s Eve gospelsinging event. Louis reluctantly agreed to attend but had two stipulations: it couldn’t last too long and their friends had to call with the invite and offer to pick them up. Louis then made it very clear to Pam she was not to call them; they had to do it on their own. It’s a good thing that God instantaneously hears the prayers of his people, because three minutes later, the phone rang with the invite and time of pickup from their friends. During the service, Pam said, “Pastor Bruce Burklow interrupted the service to reveal that God had put something on his heart to share.” The words that would later come from the Pastor were specifically directed to Louis with the interpretation stressing, “My son, my son, I have called not once, not twice, but three times. I love you. You stiff-necked child, if you turn away this time, I will never call again.” At that instant, Louis grabbed Pam’s hand and went to the altar. As he began to accept the Lord, all Louis could say through his tears was, “Jesus, I love you.” Louis then heard, “My son, I love you.”

Louis and Pam’s lives shifted in that moment as they both began a new and renewed dedication to God. They both agreed, “We finally realized it wasn’t about how much good we had done, but about how much good Christ had already done for us and that was freeing.” See, what you don’t know about this couple is that they were medically incapable to conceive. They had been trying to adopt for years through the Church, the state, private adoption, artificial insemination and all were completed to no avail. They then heard a sermon one night called “Saturday’s Coming,” which exposited Mark 11:23-24, saying “Truly, I say to you, whoever says to this mountain, ‘Be taken up and thrown into the sea,’ and does not doubt in his heart, but believes that what he says will come to pass, it will be done for him. Therefore, I tell you, whatever you ask in prayer, believe that you have received it, and it will be yours.” Louis remembered reading that verse and said to his wife, “This is what God’s word says, if we trust, it will happen.” The Hayden’s then knelt-down that evening, anointing one another with oil, praying and believing God for a child.

Pam went to the doctor shortly after and received negative results, with the doctor prescribing three pills to help her along. Louis asked Pam, “Who’s your doctor?” and then answered, “Dr. Jesus! Pam, Saturday’s coming!” While driving along the road Louis inquired about the pills. Pam said she wasn’t really-sure what they were. Louis took them from her and flung them out the window. Pam was confused and asked Louis why he threw out the pills. Louis replied, “I’m not sure why, but I know you’re not supposed to take them.” About three months later, Pam got a home pregnancy test with a positive result, a true miracle! They weren’t sure what to do, so they called the doctor and he asked for her to come in immediately. The doctor then brought Pam into his office and began to weep as he got on his knees and placed his head in Pam’s lap pleading, “You’ve got to forgive me.” He tearfully told Pam the pills he had given to her months ago would have unintentionally aborted her baby. Pam then communicated that Louis had thrown them out of the window that very day. This news caused the doctor to shed more tears.

January 1, 1981 – one year after Louis became a Christian, their first son, Joshua Hayden was born. The doctor exclaimed, “Okay, this is medically impossible, there’s no explanation but God.” Louis then expressed, “God did this once, and He can do it again.” Three years later, they prayed and asked God for another child to complete their family; less than a month after that prayer, Pam was pregnant with their second son Jacob.

Josh and Jacob became inseparable growing up. They had such different personalities but incredible gifting’s from the Lord. Josh could play any instrument he picked up, and Jacob started to preach when he was only 12. Pam said Josh was very compassionate and humble, “he would hate it if he thought he hurt your feelings in any way.” Jacob on the other hand was more of a “get over it” type of guy, believing the truth is the truth, “he wouldn’t be sorry if he hurt your feelings because he was going to shoot straight with you.” I get the honor of knowing and leading beside Jacob currently and I can tell you this is part of why I love him so much.

Life was moving steadily for the Hayden family, but on February 17, 2007 there would come a devastating impasse. Louis and Pam’s first son, Josh, ran across black ice and was in an automobile accident. Louis said, “When I got to the hospital, a peace came over me.” Pam reiterated in agreement, “God had given Josh to us as a gift, and we had no doubt he would walk out of that room.” Pam then mentioned how the story of Gideon came to her mind and how they shouted and held their position as Satan’s army had to fee. As she spoke those words, Pam’s mother began to shout and scream at the enemy in the waiting room of the hospital with a room packed full of people in support of Joshua.

There were a multitude of questions that flooded her family’s hearts and minds. Louis comments now, “Looking back on this, we reacted the way we thought we were supposed to react. We we’re taught that you have to give a certain response as a Christian. Josh died on Sunday, and we went back to church the next Sunday because we believed that we should be praising God that our son was in heaven and that we aren’t supposed to get angry with Him.” In this overwhelming instant Pam said, “My faith was shattered at that point. I wondered where God was, why He didn’t answer me.” She thought, “Didn’t he know how serious this was?” Pam and Louis both shared that in their overwhelming grief, they were mad at God. Pam said she felt as if they were, “grass trying to grow up through the concrete.”

How do you recover and heal when heartbreak like this happens? I was in awe, as Louis said, “Once we were able to process and grieve, we realized that it wasn’t God’s fault. Your mind can’t conceive what’s just happened and you come to this fork in the road. You can’t just stop moving, you still have to move forward. You have to choose which path you will take.” Pam and Louis learned to overcome their anger and devastation by realizing the cause of this accident was nothing that they did, it was nothing that God did, it was nothing that Joshua did, but that there is a time for each person on this planet to be born and a time for each person to die. Scriptures like Isaiah 43:2 came to their aid, which says, “When you pass through the waters, I will be with you; and through the rivers, they shall not overwhelm you; when you walk through free you shall not be burned, and the fame shall not consume you.” Also, Mark 11:23-24 would be reiterated time and again for comfort. Joshua’s favorite verse from the book of Joshua chapter 1, verses 5-9 is what brought a lot of healing to them. Yet one thing that helped Louis and Pam the most was the multiple visions that were brought to them. Both Louis and later on another man named Gary had identical visions from the Lord of Joshua on that night. It was said that in this vision God has asked Josh in the seconds after his wreck, “Do you hear that? That is the prayers of the faithful and I have to answer them. But, Joshua I have to give you a choice also. You can stay here in heaven with me or go back.” Josh then chose to stay with Jesus.

Another revelation came to this couple in that God wanted them to minister to people in their lives who would experience similar devastation. Pam said, “The first year after Josh went to be with Jesus, there were seven other families who lost their sons who were put into our lives; by the power of God, we were able to help them.” Louis indicated, “If I can relay anything to anyone in these circumstances, it’s that God does not turn his back on you even when you get mad and scream and are angry. God is bigger than all of that. God is bigger than all of our circumstances.” It’s mind blowing to think how God causes all things, (Romans 8:28-29) even tragedy, to work to the good of those who love him and who are called according to His purpose. In this story, I want you to hear that miracles still exist. I want you to see that God exists and that He’s not indifferent toward you but loves you as His child. It’s a misconception in Christianity that says, “God won’t give you more than you can handle.” That is false, the Hayden family can back me up. Things fall in our lap all of the time that we can’t handle alone. Roads we’re on have unexpected twists and turns, yet the promise from God to us is that He will NEVER leave us, He will NEVER forsake us, but He WILL be with us to the very end of the age. It’s bizarre how happiness will sneak through doors that we never expect to be opened. May God bless you and keep you. May His face shine upon you. May you be courageous in moments of crisis. And when all seems dark and confusing, just remember that God loves you and Saturday’s coming.