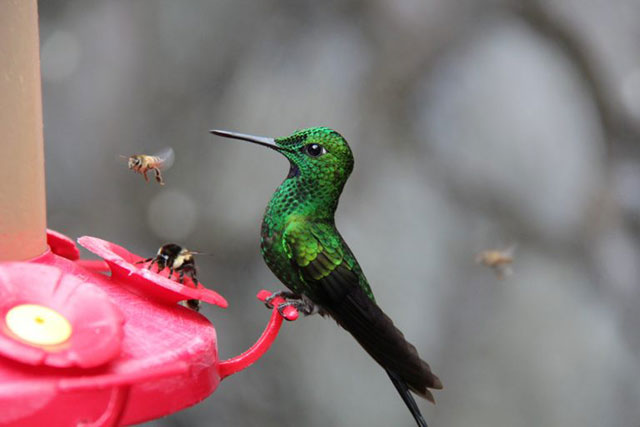 Here’s the story: God speaks everything into creation (exnihilo – Genesis 1). God then makes Adam from the dirt. Adam looks for a partner and finds no helper suitable. He sees the beaver, the rhino, the giraffe and says, “This ain’t gonna work.” God then steps in and creates Eve from Adam’s side. This not a picture of feminism where Eve is made from Adam’s front. This is not a picture of chauvinism where she’s made from his back. God makes Eve from Adam’s rib (specifically his side) because she is Adam’s helper, at his side. This model isn’t like the bachelor/ bachelorette where Adam comes in, sees who looks the best, then the women compete against one another for his time and attention. God doesn’t create 27 Eve’s and say, “Pick one”, no strip poles in this picture. Instead this serves as a key theme in marriage – EVE becomes Adam’s standard of beauty. Men, your wife is your standard of beauty.

Anyway, Adam sees her, meets her and says, “bone of my bone, flesh of my flesh, she shall be called woman for she was taken from man”. Adam then sings her a love song in Hebrew (maybe some boys II men) and God oversees and officiates the very first wedding as the very first Pastor. Genesis 2:24 says, “For this reason (this cause of marriage) a man will leave his mother and father and be untied to his wife and the two shall become one flesh”. Illustrating one God, one flesh, one marriage, one bed, one lifetime. So in case you didn’t pick up, it’s a 3-fold process. A man leaves his mother/father and grows up. He becomes a man because marriage isn’t for boys it’s for men. Then as a man, he marries and enjoys sexual intimacy with his wife.

Genesis 2:25 says, “they were both naked without any shame”. There is nothing embarrassing or wrong with this picture. God didn’t create these two, go out for lunch and come back saying, “Oh wow! What are you doing?” But instead God creates sex for man (Genesis 1:28) to multiply, have pleasure and intimacy with his wife. Then Genesis 3 happens, the fall. The man/woman eat the forbidden fruit, and this separates them from not only God but from one another. This moment completely alters the way we view sexuality, marriage, gender, and family. The couple goes from naked and not shamed, to naked and shamed. This is why stuff gets so jacked up, especially in marriages.

I love the way Beth Moore says it, “In our culture, we’ve taken girls that have 2 “X” chromosomes and turned them into 3X websites…boobs have power”. I agree, ask any guy. Here’s a few stats to back up our brokenness: $60 billion dollars is spent on pornography annually. That’s more money than pro baseball, basketball, and football combined. This tells us that America’s favorite pastime isn’t baseball, but it’s porn. 70% of students have had sex by age 17. At least 50% of children born will watch their parents divorce. We have got to break this broken cycle. And look my goal isn’t to criticize people but it’s to help transform them with a renewed mind (Romans 12:2). So we can either ignore all the places that sex is (redbox, snapchat, instagram, movies, etc..,) Or, we can go, “Man, what’s the Bible say about this stuff?”

You have urges and desires sexually, you know why? Because God gave them to you for your good and His glory inside the context of marriage. So let me ask, which view of sex do you have? (1) It’s God. If so, you probably give a lot money, time, and energy to it. Eventually your identity will come from it, because it is who you worship. (2) It’s Gross. This is the one the church unfortunately has been teaching for a while. Sex is dirty, nasty, ville, wrong so you should save it for the one you love; funny right?! (3) It’s a Gift. This view believes that God gives it to us as a steward. We are to love & protect it inside of marriage. Sex is an amazing thing inside this context. Once it’s taken from this framework it’s beauty is obliterated and it’s (in my opinion) part of why we have the statistics I mentioned earlier.

Sex is not god, sex is not gross, sex is instead a gift. It’s not so much how, what, or when but with whom. So if you’re married get busy with your spouse, because it’s first command in the Bible (Genesis 1:28).