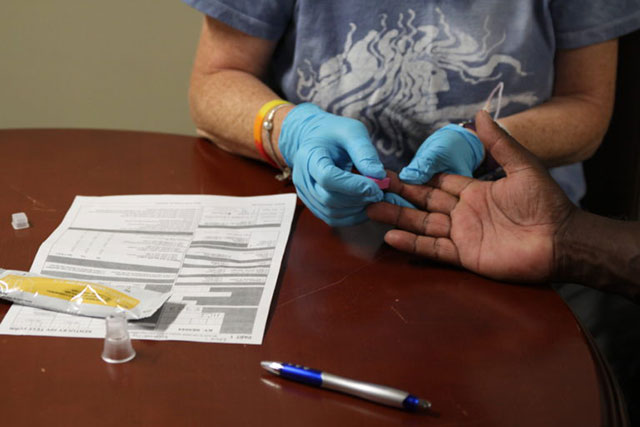 In 1994, Albert Parker thought he had been issued a death sentence. Albert was a full-time public works employee in Paducah when he began to experience flu-like symptoms that he just couldn’t shake. After losing consciousness on the job, he was taken to the emergency room where doctors ordered lab work that produced less than hopeful results.

After spending a month in the hospital, Albert was diagnosed with HIV, a disease that offered few treatment options in the mid-1990s.

“I didn’t know a whole lot about HIV. All you were seeing were a lot of gay people dying from it,” Albert recalls.

He soon learned that HIV is not a disease exclusive to those engaged in a homosexual lifestyle. It’s a disease that does not discriminate based on one’s race, gender, income, sexual orientation, age or religious beliefs.

Until 1996, Paducah lacked a clinic that specialized in HIV treatment and related services. It wasn’t until Albert and a group of other supporters began applying for grant funds that would allow them to establish what is now Heartland CARES, a non-profit organization that, for the last 20 years, has provided comprehensive health care and support services to those infected by the disease and those who are learning how to manage the illness.

Like any non-profit organization, Heartland Cares relies on grants and the benevolence of its donors. They work to promote awareness of the disease in order to help increase prevention.

“One in eight individuals who has HIV doesn’t know he or she has it,” Director of Communications and Development Suzie Webb says. “Most people don’t get tested until they start experiencing symptoms.”

Suzie encourages anyone who believes they may be at risk to get tested early and as often as needed. While anyone can contract HIV, those at highest risk are individuals who engage in unprotected sexual practices and IV drug users who share needles.

“One of our biggest challenges is getting support from people who don’t think they can identify with our population. But the truth is that HIV touches all of us,” Suzie says. “If you don’t have it, you know someone who has it or someone who is at risk of getting it.”

The Kentucky Cabinet for Health and Family Services statistics state that 5,800 Kentuckians are living with HIV. At least one person in the Commonwealth is diagnosed with the virus each day.

Heartland CARES seeks to respect their clients’ privacy and does not require recipients of their testing services to provide their names at the time of testing. The clinic provides a variety of services ranging from HIV testing to providing quality medical care.

“We offer a complete continuum of care, from (HIV) testing to medical care and counseling, to food and dietician services, to insurance enrollment, medication, transportation and dental care,” Suzie says.

Though more than 20 years have passed since Heartland CARES was established, Suzie says their staff and volunteers continue to battle misconceptions about the disease. First, HIV and AIDS are not the same thing. When treated appropriately, suppression rates of HCI clients now average around 92%.

In fact, modern medical treatments have helped to decrease the risk of spreading the disease from one individual to another, which is a sign of significant medical progress. In fact, fewer people who are HIV positive ever progress to an AIDS diagnosis; that means that people rarely die from HIV today.

Heartland CARES conducts free testing events, passes out condoms and works to educate the public on what constitutes “high-risk” behaviors. Prevention is easy, Suzie says. Wear a condom. Get tested. Know your status and know your partner’s status.

While much of the clinic’s funding comes from the Ryan White Foundation, there is a great need for volunteers and local funding to aid in promoting awareness.

“Our biggest need is to find funding to provide education about prevention and to hold testing events.  The sooner someone is tested, receives a positive result and gets into treatment, the sooner we can get them started on lifesaving medications,” Suzie says.

Twenty-three years later, Albert continues to live with HIV and is actively involved in promoting education and awareness in Western Kentucky and Southern Illinois. He’s lived with the disease far longer than he ever imagined and is grateful to the staff at Heartland CARES and all who support its mission. Albert chooses to be outspoken about the disease because he believes that his story will help others.

“I found myself more relaxed once I started talking about the disease, rather than sitting back and letting it bottle up inside me,” Albert says. “I think if more people got out and told their story and allowed themselves to be heard, it would be a whole lot better (for everyone).”

Finding Joy in The Zone

A Kitchen for the Whole Soul

“He was an angel when he smiled,” Pamela McKinney recalls of her grandson Day’von. ...