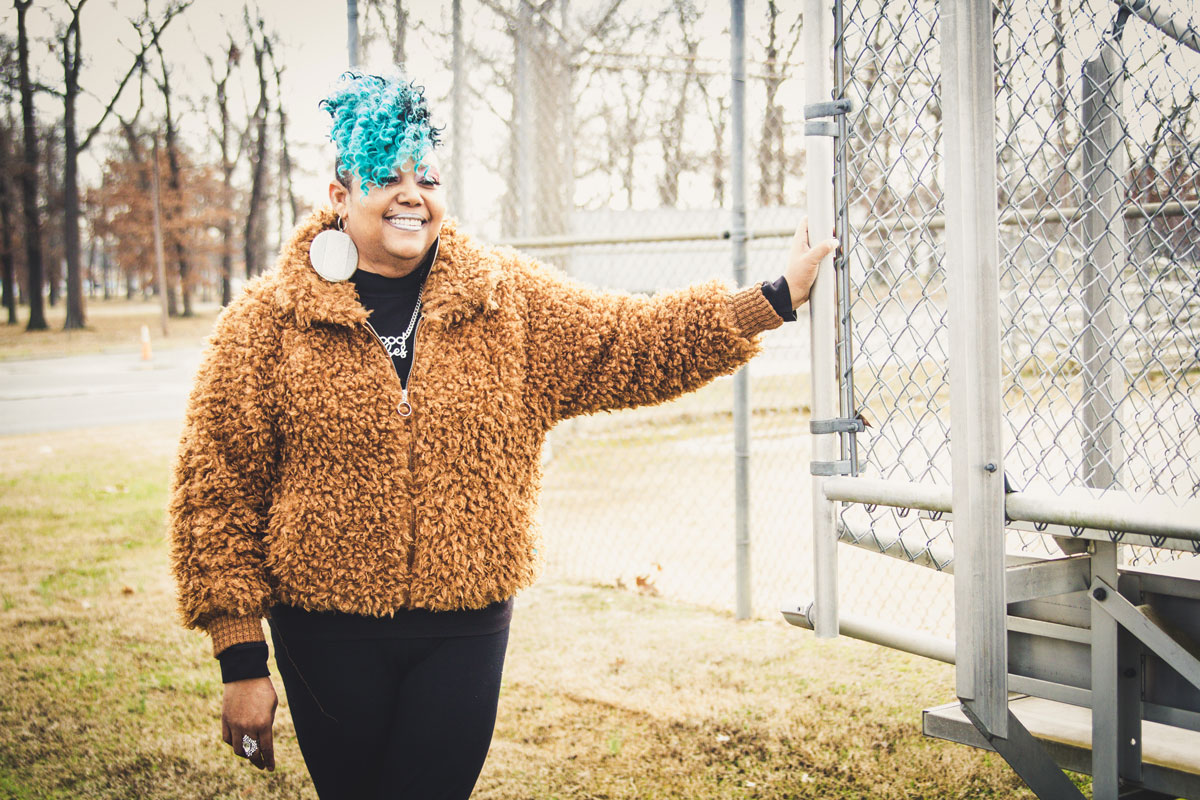 “He was an angel when he smiled,” Pamela McKinney recalls of her grandson Day’von.

“He had a million-dollar smile.”

She remembers fondly that she would dress Day’von up at the holiday in a tiny Santa costume and take him with her to deliver fruits and treats to residents at local nursing homes.

“I saw how the smiles would be on people’s faces just from seeing this little boy smile back at them,” she says.

The smiles exchanged during those visits may have been warm and full of love, but they masked something very dark from Pamela’s past.

She calls herself a survivor.

“I am a survivor of one of the most brutal child abuses that you could ever imagine. For years, I was molested. I was often used as a human ash tray,” she says.

Pamela says she had two loving parents, who, during her childhood, unfortunately, traveled often, leaving her in the care of babysitters. During these absences, she suffered severe abuse and molestation by her neighbor, a family friend.

“I was five when it started,” she says.

“I never did tell, because he had gotten into my mind that the things he did to me were my punishment from my parents for bad things I had done.”

She calls her family “giving, generous” and Pamela wanted to continue that. When the abuse started, Pamela was participating in a local troop of Brownies and she wanted so badly to earn her Good Sanitarian’s Badge, given to Brownies who did good deeds. Her abuser forbade it.

“My molester wouldn’t allow me to give out flowers and things that they told us to do to get our Good Samaritan’s badge. If he found out I did that, it would be caught up in the abuse I was receiving.”

Later, Pamela would hide her acts of goodwill toward those in her neighborhood.

“I would find out if elderly people were hungry and I’d take them food,” she says, recalling that she would hide in the bushes to make sure the food was received so no one would know it was delivered by her.

“I was still dealing with this fear of getting into trouble if he found out I’m giving to someone.”

This struggle—her desire to do good for others but her fear of the consequences–would become a fundamental thread in the fabric of Pamela’s entire life. It was the first of many things that her abuser took from her.

“I lost the ability to love,” she says.

His years of brutal abuse had also left Pamela without the ability to have children of her own.

“I never got to have any children of my own because some monster took that away from me.”

Years of her trying to heal from her childhood all by herself ended when she married into a family, complete with a daughter and a granddaughter. The final piece of her healing came in the form of her grandson Day’von.

“God sent that baby into the world because of me,” she says.

“Because I was so broken.”

“I fell in love with this baby and he tore down all the walls that I never thought would come down.”

“I didn’t think after my abuse that I could ever feel love.”

Still harboring fear for the consequences, it was not long after Day’von’s birth that Pamela began using him to hide her acts of charity.

“It was all about my healing journey. I was still dealing with my demons, but I had a giving heart,” she says.

“When my grandson was born, I used him to be my giver, because I knew in my mind that no one was going to hurt him for giving like they’d hurt me.”

Unfortunately, like so many happy things in Pamela’s life, her daughter and grandson were taken away from her.

“I had to watch his mother who was six months pregnant die.”

Day’von was only five years old when he died, just shy of starting kindergarten.

After a life filled with heartache, abuse and agony, Pamela was left once again, she says, without a chance to be happy.

“When I lost Day’von, I lost my smile once more,” she says.

“It was like God made me face all my demons and all my molestation and all the horrible things that happened to me all at once.”

While a life filled with this much pain might be enough to destroy some people, Pamela made another choice.

She fought using the tool that her grandson had restored in her—her spirit of giving.

“The day before the fire, I remember Day’von riding his bicycle. He was so happy and had the biggest smile on his face.”

So, she bought bicycles and donated them anonymously to the fire department that had fought her house fire and helped search for the bodies of her loved ones. She hoped the firefighters could give them to other children and find some joy after the tragedy.

She took donations to Clark Elementary where Day’von had gone to school.

“I went places where he went and loved people he loved.”

“That was the first time I was able to smile again after Day’von’s death,” she says.

As she did this, she not only found herself healing, but, to her surprise, she found her grandson.

“When I did it, I would be thinking of him and his smile. I could hear him sometimes say ‘Good job.’ Because that’s what I would say to him when we’d made somebody smile. In my mind, I heard him say, ‘Good job, Nana.’”

“That was my healing.”

“I became a giver again because that’s where my greatest joy was now that he was gone,” she says.

She says that God eventually spoke to her and turned her attention back toward her abusive past.

“I remember that as I got older, I would run away from home to escape the abuse. Sometimes I would stay over at Noble Park. There would be other kids over there.  I remember people coming and buying me a meal when I was over there.”

“When I wasn’t there, I’d stay in abandoned cars.”

“I remember when I ran away, I wouldn’t have anything but my purse. Everything of value that I had would be in my purse. That purse became my house. I would use it as a pillow.”

“God gave me a vision to start a purse ministry,” she says of the beginnings of her outreach ministry, now called God’s Divine Beauties.

She reached out to the Paducah community and asked for help gathering 100 purses and filling them with toiletries and other tools that would help homeless women survive and feel better about themselves. The community answered her call, in a big way.

“I’ve collected over 1,000 purses and I’ve not been able to count any more after that. A lady gave me four garbage bags of purses and toiletries just yesterday.

“When you cry out for help, people come.”

“That’s how I’ve been able to fill all these purses. We have a lot of beautiful-souled people here in Paducah.”

Pamela regularly takes her purses to homeless women in Paducah and in other larger cities. Her granddaughter Khloe, who survived the fire with Pamela, regularly goes with her on these outreach trips.

“We’ve been to Atlanta, and I went from Atlanta to Chattanooga to Nashville to Clarksville and then back to Paducah,” she says of a recent trip.

“I do it just to make the women smile. Because life is serious when you’re homeless and you need something pretty to put all your belongings in, especially as a woman. When you are homeless, it’s so easy to lose your identity as a woman because you are fighting just to survive.”

“Hopefully, if one of these women walk by a glass window and sees her reflection carrying a purse, it will remind her that no matter what she says going through or has been through or even what she may be running from, that she still a very unique and beautiful woman.”

During these visits, Pamela shares more than just her purses.

“I tell them a little about my story,” she says.

“I need the women to understand that if God can get me to the place that I am, He can do anything for them.”

“Through all the trials that I’ve went through, He’s all that I had.”

“My words to them are simple. I say that ‘God has not brought you out here to leave you. God loves you in spite of whatever you may be going through.’”

“I tell them that they are as beautiful to Him as the new purse they carry.”

The words and gifts that she shares as part God’s Divine Beauties may be simple. But what she receives in return, she believes, is profound.

“When Day’von would give those fruits when I would take him to the nursing homes and he would give those big smiles, each time that I hand a purse or give a hug to the women, the smiles they give me, it reminds me of that,” she says.

“I work harder at it because that’s how I remember him.”

“God gave me Day’von and he made my heart smile.”

“I’m still fighting today to keep him alive by giving and by sharing that love that I felt from him.”

“This ministry has developed out of pain, but it’s so beautiful.”

To learn more about God’s Divine Beauties, visit www.GodsDivineBeauties.com or follow the organization on Facebook. Pamela hopes to expand her homeless ministry soon by providing a mobile shower and dressing facility for women. She is also working to establish a support group for those living with a lifetime of abuse healing.

To support her ministries, Pamela has written a book about her lifetime of healing from abuse and tragedy called Shhh…The Devil is Listening. All proceeds from that book go to her women’s ministry. Visit www.PamelaMcKinney.com to purchase or learn more.

To learn how you can support her women’s ministry by donating purses or toiletry items, visit www.GodsDivineBeauties.com or on Facebook.

Can You Help Pamela Earn Her Badge?

The year that her abuse began, Pamela was working toward earning her Good Samaritan’s Badge in her local Brownie troop, but her attempts were halted when her kindness toward others became fuel for her molester’s monstrous abuse. Pamela says she has always regretted not earning her badge for helping others. She would like one now to use as a symbol to show the women she helps that you can achieve your goals, no matter what stands in your way.

If you know of a way to help Pamela get a Brownie Good Samaritan Badge, she asks that you please reach out to her through her website or Facebook.

PASAC: A Voice and Hope for Tomorrow