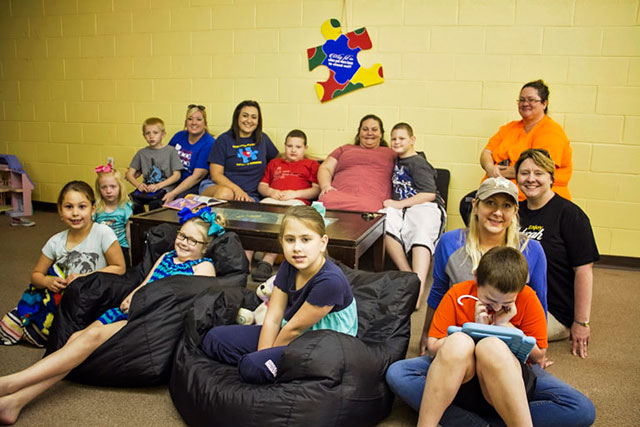 At two and a half, Max Armstrong was diagnosed with autism. Today, he’s ten, but still struggles with communication. For the most part, Max doesn’t speak much, although he has learned some sounds and words. He uses an illustrated communication book to show what he wants, but there’s still a sense of frustration when his message doesn’t come across right away. He’s also been put in special education programming because of behavioral issues.

Thankfully, his parents don’t have to deal with these issues on their own. The Armstrongs are part of a larger network, Families on the Spectrum (FOTS). In fact, Max’s mother Natalie Armstrong is currently the chair of FOTS, a nonprofit organization in Western Kentucky that helps families with autistic children interact, form relationships and plan events for their children. Most of the group’s past events have been designed for toddlers and elementary school kids, but FOTS is also trying to plan entertainment that caters to teenagers and young adults on the autism spectrum.

When asked to explain autism in layman’s terms, Natalie says, “[Autism] is basically a developmental delay, usually a social delay. Some [autistic children] are nonverbal. Some of them speak later. Some of them use sign language to speak. And it affects lots of different areas. It can affect schoolwork [or] where they’re supposed to be according to their age level. Even in babies, it can delay their milestones.”

The group began as a way to connect families struggling with many of the same challenges that autism presents.

“It was a group of parents in the area that connected through autism diagnosis, and it just grew into something bigger and bigger,” Natalie says. “It’s a support system that got started in our little area between some moms (who) needed someone to know what they were going through and (someone) to talk to about it all.”

When asked about her best memories with FOTS, Natalie replied that her time with the nonprofit was highlighted by the meaningful relationships she’s formed.

“I’ve met so many other parents that know what we’re going through,” she says. “And that’s what the organization is about, being there for each other because our kids are so different. It’s hard for them, and it’s hard for us. Birthday parties are hard; social events are hard; going to the movies is hard; everything is harder for our kids.”

Many times, FOTS rents out an entire facility for an event, such as the jump park, to ensure that their kids won’t become overwhelmed. According to the article “Anxiety and Panic Struggles,” by Kim Davis, anxiety in autistic children can be “triggered” by large crowds, so FOTS tries to maintain a low-pressure environment through their small group gatherings.

“We’re all in this together. We face struggles in the outside world all the time, so we know that our group is a safe place to land,” Natalie says.

While FOTS provides a safe haven for families dealing with autism, the group is not a shield from reality. In fact, the organization works to help prepare autistic children for the real world by helping them form close relationships with other children and families in similar situations. Autistic or not, neurotypical or not, everyone deserves a chance at a happy, functional life, and that’s what FOTS seeks to promote.

For more information go to the Families on the Spectrum Facebook page or email info@familiesonthespectrumky.org.

Always a Part of Penn